PORTRAITS OF THE DEEP

“Portraits of the Deep”, is the story of the people who provided insight to the unique history of Anatolian coasts that covers thousands of years.

A study that had never been carried out before on those who have put a great effort in this field on the coasts where underwater archeology began.

“Portraits of the Deep”; is the half-century-long story of these waters, devoted lives, scientist who made a great effort for a purpose in deep waters, sailors who set sail on our shores thousands of years ago, Yenikapı Shipwrecks, an Ertuğrul frigate that sank on Japanese coasts, the transformation of Bodrum castle into one of world’s most unique museums, and excavations of the world’s oldest shipwrecks on Anatolian coasts.

It is a journey back in time with twenty special portraits; from George F. Bass, who is accepted as the father of underwater archeology and started writing maritime history from scratch to Cemal Pulak, who is the excavator of the world’s oldest wreck; from deceased Mustafa V. Koç, one of the biggest supporters of maritime archeology to Mehmet İmbat, Turkey’s oldest sponge fisherman; from Donald Frey, who took photographs of the wrecks discovered meters under water and brought them into the sunlight to Oğuz Aydemir, who devoted himself to the promotion of Turkey; from Nergis Günsenin, who was the first person to do a wreck excavation to Oğuz Alpözen, the person who turned “Bodrum Castle” into one of the most beautiful museums in the world.

This five-hundred-page study, while bringing the past and present together with archives and photographs, it also aims to tell the story of these waters not only in our country but also abroad with its Turkish and English publications.

One of the last interviews of Mustafa V. Koç, who gave the biggest support to maritime archeology in Turkey, is meeting with the reader through the documentary DVD that is included with the book.

“Portraits of the Deep”, published with the support of TINA “The Turkish Foundation for Underwater Archeology” is the output of a long-term work and effort that stretchs from Turkey to America and Istanbul to Bodrum. 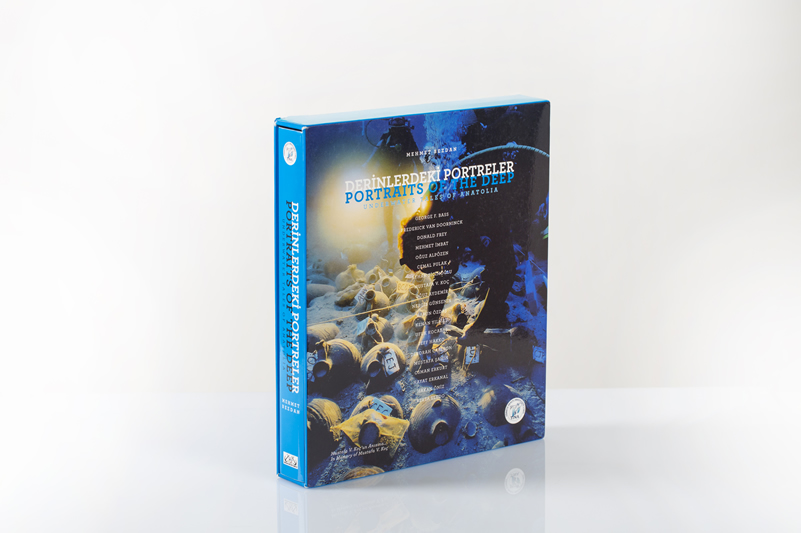 In memory of Mustafa V. Koç...